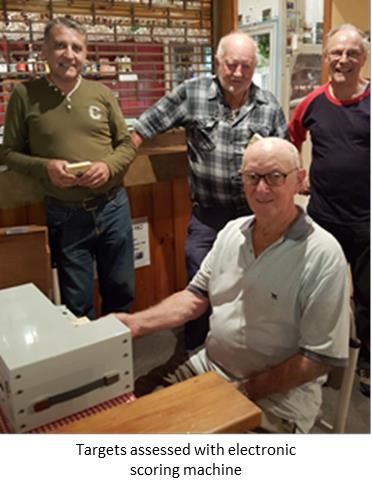 We hope all our members have enjoyed their break.  Shooting will resume on Tuesday 4th February –  ready for a monthly competition.

Club Champion Competition 2019/20 – this competition was held late last year.  It is non handicapped comp., our highest scorer on the night winning the title.  It is also a “standing” competition only (no equivalent bench rest competition has been devised as yet).  Our Club Champion for 2019/20 is Eileen Birrell, a very well deserved winner.

Our “King” for 2019 is Jim Scott, the winner of this highly sort after title.  This competition runs over many months and each shooter has just three chances a week to shoot a perfect bullseye, which is very difficult to do. After the submitted targets were carefully measured, Jim’s “bull” was judged the best of the year.  Congratulations to Jim.

The NSW Championships were held at Schutzenklub Illawarra, Albion Park Rail in November with the following results: Gold won by Eileen Birrell (B Grade) and Kathleen Birrell (Rest 2), bronze awarded to Steve Birrell (Grade C) and Eileen and Kathleen Birrell (Benchrest 2 Team).  Well done to the winners and for those who didn’t get a medal, it was still great to be involved and of course the camaraderie with your team-mates is worth the trip anyway!

Our AGM was held later than usual last year, however we were pleased to have all our Officers re-elected to their positions for another year.  Thank you everyone who attended the AGM and of course to the Committee for committing to another year.  We are a pretty easy bunch to organise really!

The air rifle club meets at the Austrian Club Sydney every Tuesday night at 7:30pm.